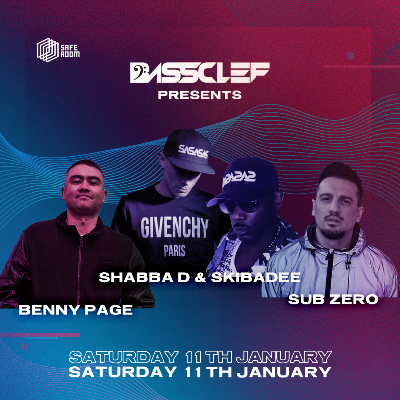 HISTORY IN THE Making!

Saturday 11th January Bassclef is proud to make history as the first event in Asia to bring you FOUR international giants of the Drum n Bass scene.

First up, the legendary MC combo MC Shabba D FAN PAGE & MC Skibadee, come to deal with the matter, deal with it proper! Do we need to say anymore? Well, we're going to anyway...

Skiba & Shabba are pioneers of UK MC culture since the 90s influencing generations of Drum n Bass, Garage and Grime lyricists. There're so many awards between them we would lose all space to talk about anything else. Guaranteed to hype up the crowd to another level with unforgettable lyrics & signature flows!

Next up? A man who stormed Jump Up in 2009 as part of G-Dub and his subsequent solo career. Sub Zero is behind such ubiquitous track as "Tink Ya Bad" & "Spin Doc", "Can't Go to Sleep" and his latest release "Sound System Dub". He'll have us bouncing off the ceiling from start to finish.

And then we move onto a Ragga Jungle revolutionary! The mighty Benny Page who made huge waves in 2006 with the unforgettable tracks "Turn Down the Lights" and "Crying Out". Expect meticulous mixing, reggae vibes and mad energy!